Stuie Monster appeared as the lead singer of The Aristocrats, performing the song "Fur" on Sesame Street in 1975 and later made appearances as a background monster (with a slight rebuild). In the album notes for The Sesame Street Monsters! album, Stuie was identified as "A Maroon and Yellow Monster."

The refurbished puppet reappeared, slightly altered, in the audience of Germany's Die Große Sesamstrassen-Gala in 2013.

A full-body costume version of Stuie was featured in Sesame Street Live's second tour, Big Bird's Super Spectacular Totally Amateur Show, where he also sang "Fur". This version had a bigger nose than the Muppet version. 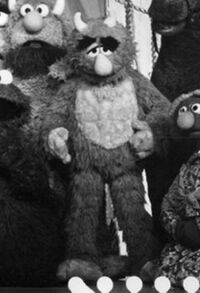 Stuie as he appeared in Big Bird's Super Spectacular Totally Amateur Show.
Add a photo to this gallery

Retrieved from "https://muppet.fandom.com/wiki/Stuie_Monster?oldid=1259765"
Community content is available under CC-BY-SA unless otherwise noted.