A Stunt Cat, dressed as a dog, is featured in the All Dog Network's coverage on the making of Dog City, as seen in episode 104 of The Jim Henson Hour. The stunt cat tries to underplay the conflict between cats and dogs, which is proven to be all too true when his canine co-stars have him endure several painful "stunts" for their own enjoyment.

The puppet was later used in The Muppet Christmas Carol, as a generic cat who chases Rizzo when he and Gonzo first arrive in Scrooge's childhood past. 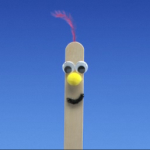