The Honey Monster is the spokescharacter for Quaker's Sugar Puffs cereal in England. Though the character was originally created by other hands in the 1970s, Jim Henson's Creature Shop was hired in 1992 to create a new, complex version of the character.

The Honey Monster, previously a static fur suit, became a full-bodied character with a fully animatronic head, including moving mouth and expressive eyes. Robert Tygner was the first puppeteer to work the animatronic head and Kevin Bradshaw was inside the suit. Over the years, they worked on over fifteen Sugar Puff commercials together. Their first outing together took them to Cape Town in South Africa and Pinewood Studios where a pastiche of the Bond films was shot. Other puppeteers and suit performers also worked on the commercial. Phil Eason, Roman Stefanski, and Richard Coombs were the puppeteers for three years or so, with shoots in Wembley Stadium, at a rock concert with Boyzone.

More recent spots, beginning around 2001, have involved other studios and a CG monster. 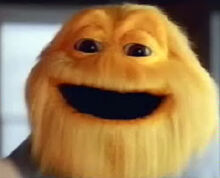 Add a photo to this gallery
Retrieved from "https://muppet.fandom.com/wiki/Sugar_Puffs?oldid=1133105"
Community content is available under CC-BY-SA unless otherwise noted.