Super Beaker wears a maroon sweater with the letter B on it, a rocket pack on his back and oven mitts on his hands. Unlike the Superhero Scooter Action Figure, who was based on an appearance on The Muppet Show, Beaker's superhero look was designed by Ken Lilly, based on the look of the title character from the film The Rocketeer.

Since Beaker's trademark 'telescope head' movement could not be built into the original action figure that came with the Muppet Labs Playset, this Beaker came with three interchangeable heads: one regular head, one half-hidden head, and a helmet that seemed to be made from a bucket. 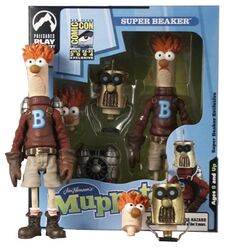