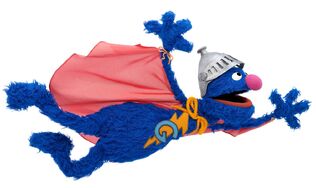 Super Grover is Grover as a superhero, one of his many jobs on Sesame Street. His true identity in these sketches is Grover Kent (referencing Clark Kent), a doorknob salesman for the Acme Corporation. Frequenting Metro City, Super Grover uses his superpowers to help others, though generally he ends up not being much help at all, while they end up solving the problem themselves.

In the 41st season of Sesame Street, Super Grover received an upgrade and his own segment as Super Grover 2.0.

On Sesame Street, Super Grover's attire consists of a cape, with ropes tied around Grover's wrists, a helmet, and a patch with the letter G on his chest. However, in most illustrations, his attire consists of a shirt with the letter G on it, shorts, a cape, and a helmet (supplied by Grover's dad). When he appeared in animated form for The Street We Live On, he wore only a cape and helmet, with no emblem on his chest. In most situations, Grover requires a phone booth to change into his costume à la Superman. One exception, such as in The Adventures of Elmo in Grouchland, enables him to spin himself around until his costume appears, à la Wonder Woman.

According to the Associated Press, writer Jerry Juhl originated the character of Super Grover. At a 2006 panel, Bob Payne revealed that he built a helmet for the Palace Guard in Tales of the Tinkerdee, which was later used to build Super Grover's costume. The Exciting Adventures of Super Grover reveals "The Origins of Super Grover," by which it is explained that Grover took on super powers the first time he wore the Halloween costume his mommy had made.

Outside of the titled sketches, Super Grover has appeared in many episodes, books and specials taking on a featured role. In Follow That Bird he joins the efforts being made to search for a missing Big Bird, ultimately by teaming up with Gordon and Olivia. In 2004 he played a lead role in What's the Name of That Song?, while Season 35 marked the opening of his own superhero school.

Originally appearing in an ongoing series of sketches devoted to his super heroic feats, Super Grover would crash through a wall bearing his logo whilst being introduced in narration by an announcer (voiced by Jerry Nelson). The "Super-Grover" title appeared on-screen in some segments, while others didn't include it. Some time during Season 23, the title was upgraded to "The Adventures of Super Grover" and included an updated version of his superhero theme, originally written by Sam Pottle. His appearances usually involved trying to help someone in trouble by doing something ridiculous such as saying "Wubba, Wubba." In most cases, the distressed individual would solve their dilemma when he wasn't looking -- and Grover, oblivious, thinks that he has saved the day. Pottle's theme continues to appear as underscores in new street stories and skits. 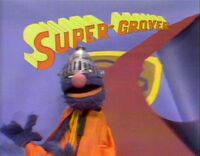 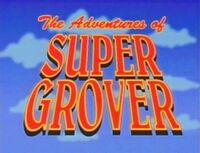 The Adventures of Super Grover title card.
Add a photo to this gallery

Super Grover's popularity has stretched out to include a number of events and attractions outside of just Sesame Street. In 1998, Sesame Place opened a Super Grover themed roller coaster, the Vapor Trail. The ride invites visitors to enter by way of a telephone booth, to "help right wrongs and do good things." The area near the ride is even decorated with a flower and shrub sculpture in the super monster's likeness.

In February of 2002, the Stage Deli in New York City created a sandwich which was named in Super Grover's honor. Super Grover appeared to unveil the new menu item.

From Season 33 to Season 37, Super Grover could be seen at the end each show's opening sequence, holding the episode number title card. He has also appeared in the opening sequences for seasons 38, 40 and 46. In 2003, he made an appearance on Martha Stewart Living and his likeness was immortalized as a Macy's Thanksgiving Day Parade balloon. Two years later, Vee Corporation extended Super Grover's reach to a touring capacity when it produced the live Sesame Street stage show, Super Grover! Ready for Action. Other stage show appearances include the first Sesame Street Live show A Sesame Street Mystery: The Case of the Missing Rara Avis and Elmo's TV Time at Universal Studios Singapore. In the latter, he is joined by his sidekick Kung-Fu Cookie, as the two try to retrieve the missing Cookie Diamond. Oscar finds the diamond, which had ended up in his sardine tin, but Super Grover takes the credit anyway.

When NASA conducted its Orion Flight Test in December of 2014, several accessories were included to help provide extra weight to more accurately analyze its mission readiness. Among several items from popular culture included to garner increased interest from the public, Super Grover's cape flew on board Exploration Flight Test 1 for its four hour duration in space, making two full orbits around the Earth. The following July, NASA astronaut and representative Ricky Arnold made a visit to the set of Sesame Street to return Grover's cape to him in an event chronicled on social media.

Like any superhero worth his salt, Super Grover has also spawned considerable merchandise, not only outside of Sesame Street but even on the street itself. The furry hero has graced the cover of Sesame Street Magazine over the years, including the April 1988, October 1993 and August 2005 issues. He's also appeared in and has been the subject of several Sesame Street books. Merchandising for Super Grover has included a number of t-shirts, figurines (by Tyco, Applause, Enesco, Tra-la-la, and Colin), a Christmas ornament, a toy car, a kite, a puzzle, and a limited edition action figure made by Palisades Toys.

For Palisades' action figure, comic book artist Alex Ross was commissioned to create a portrait of Super Grover for the packaging, which was later produced as a limited poster print direct from the company. Previously, a Super Grover action figure had been attempted by Fun-4-All, but the license never came to fruition. His likeness has been produced in various forms of plush dolls (including playsets by Soft Play and Gund), as a scented, bobble head pen, building blocks, a jack-in-the-box, a plush bookmark, a coffee mug and various figurines (by Applause, Tyco, Fisher Price and Learning Curve).

Within the Sesame Street universe, his popularity can be evidenced by the existence of secret decoder rings (seen in What Did You Bring?), life-sized door posters (Spring Cleaning) and pinball machines (See No Evil, Hear No Evil, Smell No Evil). Even Grover himself asks his mommy to read him Super Grover books on two occasions in The Sesame Street Dictionary. 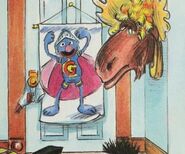 Pinball machine in the Sesame Street Clubhouse
See No Evil, Hear No Evil, Smell No Evil
Add a photo to this gallery

“Presenting the further adventures of everybody's favorite superhero, the man who is faster than lightning, stronger than steel, smarter than a speeding bullet... it's Super Grover!” 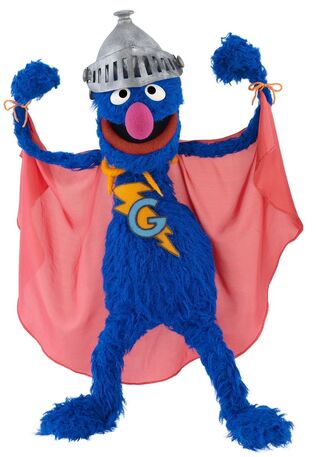