Super Morphin Mega Monsters was a recurring Sesame Street sketch in the 1990s, spoofing the Mighty Morphin Power Rangers franchise, down to the logo and theme song.

The Mega Monsters team consisted of Elmosaurus, Zoeceratops, Telly Dactyl, and Rosita Raptor (in that configuration), who would "morph" into caped and helmeted outfits when trouble arose. Their arch-enemy was the evil monster alien Zostic, ruler of the planet Enormous, who would send his underlings to cause trouble on Earth.

In contrast to the fight scenes on the real Power Rangers, the Mega Monsters would run around and wave their arms in vaguely martial arts-style motions, but would only reason with others instead of attacking.

A still from the segments was used on the cover of the critical book Saturday Morning Censors. 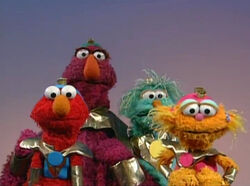 Retrieved from "https://muppet.fandom.com/wiki/Super_Morphin_Mega_Monsters?oldid=1182783"
Community content is available under CC-BY-SA unless otherwise noted.