This exclusive figure of Scooter was made by Palisades Toys in honor of The Muppet Show’s 25th anniversary. It was sold through Toyfare.

The figure was based on Scooter's appearance on episode 419 of The Muppet Show, where all the Muppets decide to become superheroes. The foldable stepladder and the book are based on the scene where Scooter instructs the others on how to fly.

The figure is a variant of the regular Scooter Action Figure from series 3, with a lightning cap on his head, a green fabric cape around his neck, and a red piece with a gold star strapped around his chest. In the original scene, Scooter did not wear his green jacket.

The text in the "How to be a Superhero" handbook is (almost) the exact text from the episode. On the cover, Jim Henson and Frank Oz are credited as the writers. The book is recycled from the book that came with the Dr. Bunsen Honeydew Action Figure. 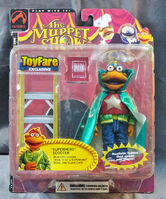