Superman is a superhero who first appeared in Action Comics #1 published by DC Comics.

The character, created by Jerry Siegel and Joe Shuster, subsequently appeared in various radio serials, television programs, films, and video games. As an alien living on Earth, sent here from his dying planet, Superman possesses powers far beyond those of mortal beings. He resolves to use them to help others, aided in this quest by a host of companions including Supergirl (his cousin), Batman, and Wonder Woman.

In 2001, the Jim Henson Company optioned the rights for a film screenplay called Only Human in which "an earthling baby is sent to live on Superman's home planet, Krypton."

“I've always been interested in comic books as an art form, and when I was younger I was addicted to them. I read Superman and Superboy, but Captain Marvel was probably my favorite of the super-heroes. The comic I loved best, though, was Pogo. After all, Kermit's beginnings were in a swamp, too.”
—Jim Henson[1] 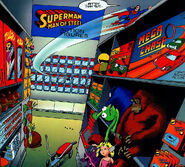 Superman Villains: Secret Files and Origins (1998) features a faux catalogue of devices sold by the Toyman that references Tickle Me Elmo.

Other cast/crew in Muppet/Henson productions also appeared in Superman-related works.

Visit the:
Superman Wiki
Wikipedia has an article related to:
Superman
Community content is available under CC-BY-SA unless otherwise noted.
Advertisement