"Surprise!" is a Sesame Street song originally sung by a band of Anything Muppet hippies that would evolve into Little Jerry and the Monotones. It talks about the good and bad parts of surprises, and how people respond to them.

Throughout the song, various characters appear during the sketch in cutaways demonstrating surprises, including: Oscar surprising Susan with a snake in a can; Herbert Birdsfoot in a room surprised by Roosevelt Franklin, Roosevelt Franklin's Mother, Herry, Cookie Monster, Prairie Dawn, and Grover; and Herry sneaking up on Bert. After the many clips of various surprises, the back-up singers eventually give the lead singer their own surprise for him at the end of the song.

The song was also performed on two occasions in street scenes: in Episode 2452 where Little Jerry and his group visit the street, and in Episode 2867 as sung by Elmo, filling in for a sick Little Jerry, with Big Jeffy and Little Chrissy. 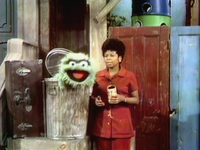 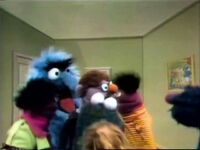 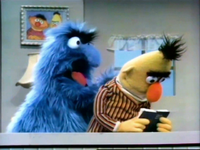 Retrieved from "https://muppet.fandom.com/wiki/Surprise!_(Moss)?oldid=1321957"
Community content is available under CC-BY-SA unless otherwise noted.