Susan Lucci is a Daytime Emmy Award winning actress who has played Erica Kane on the soap opera All My Children since 1970.

In the January 1983 issue of Muppet Magazine, she was interviewed by Kermit the Frog and played a role in Veterinarian's Hospital. In 2005, on The Tony Danza Show, Miss Piggy denied she and Susan are rivals, "she couldn't hold a candle to me." In fact she even allows Piggy to borrow her Emmy now and then, "when she's out of town, and no one's around, and her alarm system doesn't go off..." (YouTube)

Other credits include playing Annie Oakley in the Broadway revival of Annie Get Your Gun, hosting Saturday Night Live, and a guest appearance on The Love Boat. 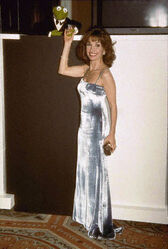 Susan Lucci with Kermit the Frog at an awards ceremony 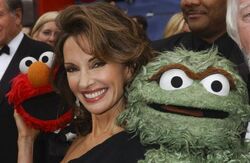 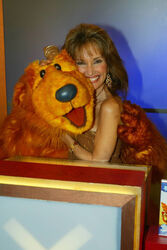 Lucci with Bear on Hollywood Squares.
Add a photo to this gallery

Wikipedia has an article related to:
Susan Lucci
Retrieved from "https://muppet.fandom.com/wiki/Susan_Lucci?oldid=1076989"
Community content is available under CC-BY-SA unless otherwise noted.