The Swedish Chef was featured in the ninth and final series of Palisades Toys' line of Jim Henson's Muppets action figures.

The Swedish Chef figure is a slightly updated version of the Chef that came with the playset and the Culinary Catastrophe Swedish Chef Action Figure. Most of the sculpt has remained the same, but his head is skinnier and he has moving biceps. His face has a more natural color. He wears a yellowish-white suit that's true to his costume from The Muppet Show while the previous Chefs wore striped shirts. His hat is magnetic.

The Chef can hold the blunderbuss in his hand. The basketball hoop, which fits in the playset, was taken from the famous "Chicken In The Baskee" sketch from episode 311. The tomato is a repaint of the smiling tomato that came with the Statler Action Figure. 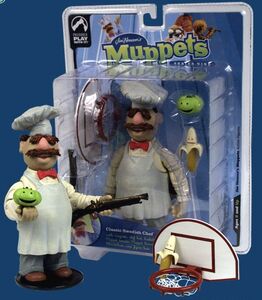 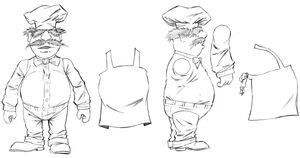 Add a photo to this gallery
Retrieved from "https://muppet.fandom.com/wiki/Swedish_Chef_Action_Figure?oldid=1101355"
Community content is available under CC-BY-SA unless otherwise noted.