Takalani Sesame (Be Happy, Sesame in Venda) is the South African co-production of Sesame Street. The show has aired on SABC since July 2000. 65 episodes have been produced.

The Muppet characters include Kami, Moshe, Zikwe, Kupukeji and Zuzu. Elmo's name on the show was Neno. They were designed by Ed Christie.

Takalani Sesame made international news in September, 2002 when they introduced Kami, the world's first HIV-positive Muppet. Kami's name is derived from Kamogelo, which means acceptance or welcome in Zulu, Sesotho, and Setswana. A special ad campaign based on this health focus, titled Takalani Sesame Presents: talk to me..., won international awards.

The human characters include the following:

When the series relaunched in 2020, Neno was known as Elmo. Zuzu, Kami, Moshe, and Zikwe returned, and were joined by Grover, Basma, Jad, and a chicken named Chicken.[1]

The donation of $5 million dollars towards the project in December 1997, by the U.S. Agency for International Development, was criticized by President Nelson Mandela and other government officials. Mandela and the others were angry "over their lack of input into AID decisions." Some officials noted that the funds could have build three needed primary schools, and that television sets aren't readily available in "the largely poor townships." AID defended the funding, saying the program was approved by the South African Education Ministry.[2]

In 2008 the 5th season was shot in High Definition to ensure a clearer picture and superior sound quality.

Season 4 (2006–November 9, 2007) opted for a different approach, airing on Tuesdays episodes filmed all in seTswana, tshiVenda on Wednesdays, isiZulu on Thursdays, sePedi on Fridays and English on Mondays on SABC 1 and Saturdays on SABC 2.

Season 5 (2008) sees a new choice of languages including isiXhosa, xiTsonga, seSotho, Afrikaans, and a continuation of English.

Tanzania adapted material from Takalani Sesame to make their own coproduction, Kilimani Sesame.

The 2020 reboot is aired in English on Mondays, Sepedi on Tuesdays, Zulu on Wednesdays, Afrikaans on Thursdays, and Tshivenda on Fridays.[3]

Writer Linda Weber wrote four Takalani books, two of which were published in English, Afrikaans, isiZulu and isiXhosa. The titles were Zikwe's Goat, Clean!, Out and About!, and Moshe goes to the game reserve. Weber also wrote two activity books, Learn with Neno and Play with Kami.

A plush Kami doll was created for a children’s festival in South Africa. No details of its release or maker are known.[4] 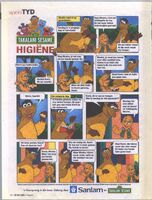 Retrieved from "https://muppet.fandom.com/wiki/Takalani_Sesame?oldid=1287527"
Community content is available under CC-BY-SA unless otherwise noted.