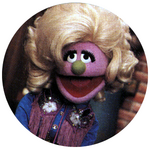 Having established below that this article is for the character that appears on audio albums (who is different from Polly Darton), could this picture be Dolly Pardon? Sesame Street Unpaved captions it as Polly Darton... is that a mistake, or was this puppet really called Polly Darton on the show? —Scott (talk) 21:36, 14 June 2007 (UTC)

I'm confused by your question, Scott. You say the caption is Polly Darton, so why do you suspect it was actually a picture of a character who was just a name on an album with a country music spoof theme? It's Polly as far as I remember her. The reason it's a different picture from the one on her page is no doubt because they just changed AMs with her as time went by, and updated the look; see also Grand High Triangle Lover, who has two appearances (the other's on Fat Blue). -- Andrew Leal (talk) 00:19, 18 June 2007 (UTC)

I'm sorry for the confusion. My question is this: can we verify that the picture to the right is of an AM named Polly Darton, given the fact that the Polly Darton who appeared on the show did not look like this? —Scott (talk) 01:03, 18 June 2007 (UTC)

Again, I don't think we have proof that the Polly Darton on the show didn't look like that, it just doesn't match the image we currently have up there. It's mildly possible it's a wrong image attached to the caption of some other singer, near impossible that it's "Dolly Pardon," and most likely (and fits my own memory, though I have no YouTube clips to prove it) that they simply varied the puppet. -- Andrew Leal (talk) 01:07, 18 June 2007 (UTC)

And I'm answering again. I say it is according to my memory. As I said at the beginning, "It's Polly as far as I remember her." And since the book confirms that memory, I think that's decent evidence. If you need further proof, Guillermo's probably the one to ask. -- Andrew Leal (talk) 01:15, 18 June 2007 (UTC)

Hooray! It's a good thing I never got around to adding a page for "Dolly Carton" from The Muppets Make Puppets!. That would only compound confusion, I fear. Somebody in Muppetland adored spoofing Dolly, I guess; this never seems to happen to Diana Ross. -- Andrew Leal (talk) 01:27, 18 June 2007 (UTC)

There might be two parody muppets then, because i've always remembered a Dolly Pardon. When doing a search for her on here, a record with one of her songs comes up too. (for Dolly Pardon that is). --Radionate 18:50, 18 February 2006 (UTC)

Thing is, that Dolly Pardon isn't even a Muppet! on The Count Counts, many of the animated or live action insert skletche songs were re-recorded by the Muppet performers, spoofing noted singers ("Tammy Whynot" is also on the list). Can you recall when or where you knew "Dolly Pardon"? Was it a one off sketch about manners or something? As otherwise, Sesame Street Unpaved and most sources say "Polly Darton." --Andrew, Aleal 18:55, 18 February 2006 (UTC)

I can't say. So I guess it would be best to strike out Miz Pardon, and stick with Polly Darton, unless someone else can come up with more then just my fuzzy memory of a character being named that. -Radionate 19:03, 18 February 2006 (UTC)

Well, we can either make this a redirect until further info comes along, delete, or make it about her inclusion on the LP. At this point, an "Audio Characters" category is the next logical step anyway (I'm worried by Leonard Birdseed, though, since an actual puppet seems to existm unless it was a poser made to illustrate the tape booklet, which is certainly possible), --Andrew, Aleal 19:07, 18 February 2006 (UTC)

Retrieved from "https://muppet.fandom.com/wiki/Talk:Dolly_Pardon?oldid=1034794"
Community content is available under CC-BY-SA unless otherwise noted.