RYAN: What are some of your favorite Grundgetta moments?

PAM: Oscar and Grungy almost got married, and they had a fantasy about having grouch kids. They decided it might make them happy, so they bailed out of the wedding. Little did they know that way to be truly grouchy is to get married. They also went on vacation to Camp Mushymuddy, and they did a wonderful song floating down a swamp in an old tire. Andrea Martin played Edith Prickly as a shoe salesman, and she tried to get Grundgetta some shoes. Jerry Nelson played Professor Piggens (as a human) who tried to teach Grundgetta to be a real grouch a la My Fair Lady. That was just great.

I would say no. Those types of inserts were filmed by separate film crews than those involved with the Muppets. Still, on the off chance that it could have been him, we'd have to prove it by some other means. That screenshot isn't very conclusive. — Scott (talk) 17:40, 14 November 2006 (UTC)

Yeah, that's not the best picture to use, but it was the only one of him that I could find. There's a segment in Episode 2124 (or Episode 2125) where he looks into the camera and the light hits him better. If anybody can get a good picture of this it would help answer my question better. It's his eyes and the smile lines around his mouth that got me thinking this is him. -- MuppetDude 17:43, 14 November 2006 (UTC)

She Drives Me Crazy? 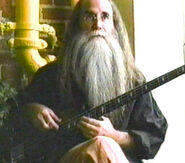 I finally found my copy of She Drives Me Crazy (though some moments at the beginning, including Phil Collins with cue cards, are clipped). Not having an easy time identifying some of the mid-90s celebrities, but I spotted the above. I can't help thinking that's Jerry Nelson, just with a longer beard and hair than we usually see him with. It's an odd context to be sure, but the face and the eyes seem almost unmistakeable to me. Anyone care to weigh in? -- Andrew Leal (talk)

I agree, it's a bizarre inclusion. But it's clearly not a member of ZZ Top, or Pete Seeger without a shave (I checked!) And there's no proof the beard is fake. Maybe he was trying a new look. Here's another shot, with eyebrows raised, which really looks a lot like Jerry Nelson. I know it's weird, but I'm really starting to think it has to be him. -- Andrew Leal (talk) 15:52, 9 October 2006 (UTC)

Well, you can't grow a beard like that overnight. That's years of beard. I agree that it looks like him, but I would be opposed to stating that in an article unless there was definitive proof. Is there a list somewhere of who was in the video? -- Danny (talk) 15:59, 9 October 2006 (UTC)

Oh I agree (though that is in fact what we did with Kirk Thatcher as the Klingon), but I think there's more visual evidence to at least suggest it than User:Scooter's claim that Jerry was Santa Claus in Hey Cinderella! (I need to ask him about that again). And there's no credits or definitive list. Bits and pieces have been added from pieces in Entertainment Weekly, Variety, and just sightings. Who would be the best person to contact on this? I don't know if the Henson Archives would have archiveed call sheets or anything. By the way, a [dead link] YouTube video is up, but of a different version than the one I taped off of Nickelodeon (with portions of the John Landis frame scenes). The MaybeJerry bearded man shows up right before Dick Clark. -- Andrew Leal (talk) 16:08, 9 October 2006 (UTC)

I just don't think it makes sense. The cameos were all celebrities. Why would they include a Muppeteer that nobody would recognize, and then have him in a beard so even Muppet fans wouldn't recognize him? Santa in Hey Cinderella makes sense, the Klingon on MT makes sense -- those are places where you'd do a little inside-joke cameo. It doesn't make sense here. -- Danny (talk) 16:19, 9 October 2006 (UTC)

I agree with all that, but while we haven't proven conclusively it's him, I'm also not completely convinced it's *not* him or of who else it could be, unless it's a session musician or something (Clifford's cameo could be just as obscure for anyone who hadn't watched The Jim Henson Hour). The inclusion of a bearded, smiling older gent strumming a banjo, sitting in front of a bright yellow drainage pipe, and neither singing/talk-singing nor dancing (like every other participant in the video; even Phil Collins does an air guitar bit) is just plain weird period, whether or not it is Jerry, so I'm not sure that's a strong enough argument against it (neither does it prove it, though). At this point, we probably need to find a way to contact someone who would know, or has access to call sheets, records, quotes, anything. -- Andrew Leal (talk) 16:38, 9 October 2006 (UTC)

Does anyone know the name of Jerry's character from the Jim Henson Hour episode he was in? My memory wanes.. -- JParanoid

The one I was thinking of was in Episode 105: The Ratings Game where he had his own screen on the wall showing the different ratings. Vicki names him when she's explaining the system to Kermit. I didn't know about the zoologist thing, if you can confirm that he and Fran were in it, we should add that info. -- JParanoid 17:29, 21 January 2006 (UTC)

Lara's talking about Song of the Cloud Forest. I think Jerry and Fran's appearance in that rises above "cameo". Like I wouldn't call Jerry's appearance in Lighthouse Island a cameo. --Erik Ebrowne 18:56, 22 January 2006 (UTC)

I agree that there's some distinction between a cameo appearance and an actual role, but I think they still belong on the cameos page. When people come to this page, what they want is a list of when the performer appeared on screen. -- Danny Toughpigs 19:05, 22 January 2006 (UTC)

Is there a source for the information about Christine's illness? I feel a little uncomfortable posting such personal information. Was it published somewhere? -- Toughpigs 20:35, 30 Dec 2005 (UTC)

Jerry and his daughter Christine made a cameo appearance in The Great Muppet Caper. Christine Nelson had been diagnosed with Cystic Fibrosis when she was young. Jim Henson allowed Christine to make a cameo along with her father in a Muppet movie because her dream was always to become a movie star. Sadly, she passed away before being able to see her big-screen debut.

Without doing a ton of research here, I can somewhat confirm this. I know that Jerry has spoken about Christine and her illness many times. I distinctly remember hearing a story that basically goes like this: Jim Henson knew and loved Christine, and did a lot to allow Jerry to take time off to spend with her and the family. Jim also financially helped the family cope with it – rumor has it that Jim raised the Henson Co's healthcare minimum just to help the Nelson family. Jim let her be in TMTM due to her life-long dream to one day be a big movie star and work in Hollywood (like her dad). Jerry talks about Christine's illness and the effect on his career in Muppet Central's interview with him -[2] and I remember reading other things from Jerry on the subject (as he has been a public supporter of the fight on Cystic Fibrosis, as well as building awareness of the condition). However I don't know how relevant this information is, or if it is considered "too personal" to be posted here. -- GregJames 07:10, 2 Jan 2006 (UTC)
I posted too soon, because I just found on IMDB what looks like a direct source of this story in Jerry's bio: [3] -- GregJames 07:16, 2 Jan 2006 (UTC)

IMDb has been proven time and again to be an unreliable source of information. Ken Plume's interview with Jerry is a good source, but it doesn't confirm any of the rumors you talk about. I don't think the information needs to be in the wiki anyway. If Jerry wants to talk about it briefly in an interview, that's fine. But it doesn't need to be speculated on in an encyclopedia. -- Scarecroe 14:56, 2 Jan 2006 (UTC)

Jerry's ex-wife Jacqui Gordon wrote a biography of Christine (I think it's called 'Give Me One Wish - have have read it, bought a copy from Amazon, but can't find it at present). Anyway in it she mentions quite a bit about Jerry's work, and about occassions when Jim trid to make things easier, including the story about Jim raising the Henson Co's healthcare minium, just to help Chistine. Some years ago, (around 1999, I think, I seem to recall JN mentioned/recommended that book in a Muppet Central forum thread about Great Muppet Caper). Emma 17:06, 9 October 2006 (UTC)

Gordon's book should be helpful, along with my recent interview with Nelson. jessicamaxstein.com. Max riverbottom

Retrieved from "https://muppet.fandom.com/wiki/Talk:Jerry_Nelson_Cameos?oldid=530230"
Community content is available under CC-BY-SA unless otherwise noted.