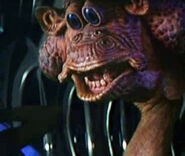 So, I'm digging into the LIS DVD I recently acquired to get some grabs of "the Robot" and I'm finding that they didn't really include any full-body shots in the whole movie. There's a production gallery on the disc, but it's just drawings. The real treasure however, was found in the deleted scenes. An entire character was dropped from the final cut of the movie, but not before sequences were filmed from a seemingly meticulously created creature. I haven't been able to confirm Henson's involvement, but it's got Creature Shop written all over it. It was suggested in dialogue that she was meant to have been a grown-up version of Blawp. So anyway, I thought you'd enjoy these findings. —Scott (talk) 19:28, 25 April 2007 (UTC)

Nifty! It's been a far from unmixedly pleasant week (health, sleep, school stress, everything seemingly going to pot), so this does gruntle me more than somewhat. Especially nice when we discover a new unfinished character. -- Andrew Leal (talk) 13:08, 26 April 2007 (UTC)

Andrew uploaded this screenshot of an archived LIS page on the Creature Shop website which explains their involvement with the robot. —Scott (talk) 05:52, 18 April 2007 (UTC)

Retrieved from "https://muppet.fandom.com/wiki/Talk:Lost_in_Space?oldid=452199"
Community content is available under CC-BY-SA unless otherwise noted.