While they're hosted by Wikia, they don't really have anything to do with this community. There's also nothing on that wiki, and there's a link on our front page anyway. —Scott (talk) 15:20, 25 June 2009 (UTC)

"One of the bigger geek sites on the internet. Among others you can find 2054 biographies on Muppet characters, a huge article about Muppet eyes and a list of all the puppeteers that have worked with Henson"

This may be too minor to include on the article proper, but I wanted to document here that Jimmy Wales yet again used Muppet Wiki as an example of "a resource for community created long tail content." [1] —Scott (talk) 16:07, 29 February 2008 (UTC)

our logo overlay
Add a photo to this gallery 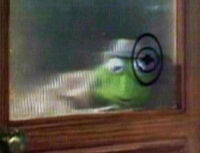 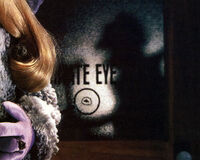 Sept 1986
Add a photo to this gallery

Just to archive a notable observation here, the new Disney Xtreme Digital version of Muppets.com appears to have used Muppet Wiki's logo in an official capacity. The widget for the News Flash videos uses the Kermit eye as the title screen before The Newsman's sketches begin. As cited on this article about Muppet Wiki, I designed our logo as inspired by the similar graphics used in The Muppet Show episode 414 and the March entry from The Miss Piggy Calendar 1980. Now, it's a fairly identifible image that could easily have been designed by someone else free of any influence here, but I can attest that the logo was created from scratch in Photoshop with very specific dimensions. When I discovered the use of it on Muppets.com, I compared the two by dropping the original layered PSD file over what they're using and it's an exact match. The black outline as seen in the accompanying image drops neatly over the green version as seen on the widget. Instead of creating a new graphic, they just used ours. So that's a nice little affirmation for the wiki community that we're noticed outside of our efforts here. I just thought I'd point that out as a note of some pride for us. —Scott (talk) 21:34, 7 February 2008 (UTC)

I just took it out. That's going to change pretty frequently, whereas the article number thing is done in such a way that it updates itself. -- Andrew Leal (talk) 04:52, 27 November 2006 (UTC)

An Article of Its Own

Cause we are Muppet Wiki. I think it's silly and not really necessary. Putting a little picture of the icon on the right side of the page, when it's already there as the actual logo on the left side of the page... I don't get it. -- Danny (talk) 04:48, 3 July 2006 (UTC)

I just discovered this, um, funky little page linked from the main page. While there may be no harm in it, I can't help but feel that if it *is* to be linked from the main page, it should be worked on. It just reiterates the purpose statement and has the cute logo. At the very least, links to the FAQ or other newbie-friendly descriptions would help. -- Andrew Leal (talk) 03:13, 14 September 2006 (UTC)

That works too. Either way, it needs improvement if it's going to be sitting on the front page. Right now, it mostly just says that you, Danny, and Scott founded the thing. -- 03:32, 14 September 2006 (UTC)

Retrieved from "https://muppet.fandom.com/wiki/Talk:Muppet_Wiki_(website)?oldid=935167"
Community content is available under CC-BY-SA unless otherwise noted.