MuzikJunky posted a transliteration of the Japanese title: Sesami Sutorîto. The show is also listed this way on IMDB. Should we change this article's title? -- Danny (talk) 22:25, 7 February 2008 (UTC)

If we can confirm that this is actually what they use on the series, I'd say move it. I don't trust IMDb alone, though, since several of their akas are incorrect or made-up and so on. IMDb lists several non-existent versions of Fraggle Rock, after all. I'd be more in favor of it if we could find a screen grab or merchandise with that title, or if someone like MasterYoshi, who lives in Japan, can confirm it.-- Andrew Leal (talk) 06:11, 10 March 2008 (UTC)

I've saved and uploaded these two images that I think would look nice for the main page, but not sure which one to use...MasterYoshi 04:33, 23 February 2008 (UTC) 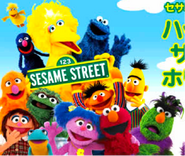 As is often the case, the international Wikipedias are useful research tools, full of information on the overseas Sesame shows. And just as often, they're difficult to translate, especially the Japanese one. I'm not sure I can even post a direct link (although, if you go to the Wikipedia Sesame Street page, you can reach it from there), so on the off-chance any Japanese folks around here can help, I'm just pasting some of the text. Their page has a full cast list not just for puppeteers but for the dub voices, but I can't make hide nor tail of it (and depending on what screen's are used, the text may not even come across, but here goes).

The only thing I can make out is that the same actor voices Baby Bear, Natasha, and Bert (and Elmo in NHK); another was Cookie Monster in the NHK version, Count Von Count, Oscar, and Snuffy, and still another is Ernie and was Big Bird for NHK. If anyone can put any English-letter *names* to any of these, or for the Muppet character name translations, feel free to help. -- Andrew Leal (talk) 05:42, 12 August 2006 (UTC)

Okay, that didn't work, although the proper language characters show up when I press edit. Anyway, go to Wikipedia's Sesame Street page as mentioned, and find Japan sandwiched between Netherlands and Poland. That said, thanks to the fact that Wikipedia had an English version of one actor's name, it seems the Japanese voice of Oscar et. al is Tôru Ôkawa, as loosely confirmed by taking a Babelfish to his resume. So yay, one down. -- Andrew Leal (talk) 05:59, 12 August 2006 (UTC)

As far as I know, Toru only voiced Oscar in the NHK dubbed version of the show. When the new one started, the NHK voice actors were replaced by different ones. MasterYoshi 15:16, 19 August 2006 (UTC)

I found a much better image for the page here Thing is it's got a copyright on it. If anyone can cut up the picture it would be great. MasterYoshi 07:51, 18 August 2006 (UTC)

Here it is... Image:Sesame japan cast white bg.jpg. I "cloned" out the copyright, instead of cutting the image. Little choppy, especially on the plaid, but it lets us keep the magenta girl's flower in the pic. -- Zanimum 20:16, 18 August 2006 (UTC)

The Snuffleupagus one says Snuffy, not Snuffleupagus. The other ones are correct. If you cannot use macrons to denote long vowels in romanized Japanese, use the circumflex accent instead, so I romanized ’em fuh ya. That other stuff next to the names is not necessary. Peace. MuzikJunky 02:25, 17 December 2007 (UTC)

Retrieved from "https://muppet.fandom.com/wiki/Talk:Sesame_Street_(Japan)?oldid=301197"
Community content is available under CC-BY-SA unless otherwise noted.