I'm trying to figured out what movies are being parody on the posters in the background during the festival. I know "The Mommy" starring Grover is a parody to "The Mummy" (1999 film), but I'm not sure about the movie posters with Ernie or Super Grover is about. Can anyone identified? Here is a video clip of the Pre-Show to help more with identifying and to add to this article while it is still up. Steven (talk) 21:33, September 9, 2012 (UTC) 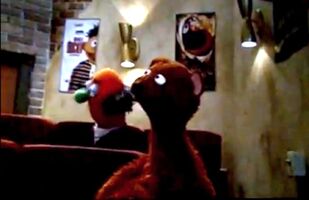 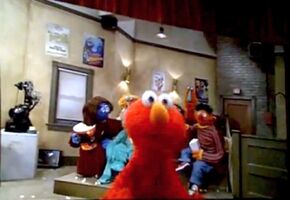 The one with Super Grover doesn't seem like a specific spoof to me; the Ernie one looks very much like something. I don't know what movie though. - Oscarfan (talk) 22:14, September 9, 2012 (UTC)

I'm pretty certain that Caroll's voicing Big Bird in this while Vogel's puppeteering (Here's some video proof; I think Vogel could be doing the singing voice though). Caroll can also be heard as Oscar here (though it's not clear if he's just doing the voice.) -- Jon (talk) 05:26, June 7, 2011 (UTC)

I've seen this and I can confirm it's Spinney voicing both Oscar and Big Bird. I'm also pretty sure someone else was puppeteering them. -- Oscarfan 11:33, June 7, 2011 (UTC)

Great! Thanks for validatin'! It somehow seemed inevitable to me that Oscar would be just voiced by Spinney, as the Bird is here. Tartaglia could be doing Oscar's puppetery, but there really isn't an easy way of knowing that for sure. -- Jon (talk) 13:51, June 7, 2011 (UTC)

Actually, it was Matt who performed Big Bird...in the original filmed version. When the show finally made it to America, they re-dubbed all of Big Bird's lines with Caroll. I know this because I've seen a short clip of the intro years ago, and it was indeed Matt as Big Bird. With that said, if Matt was doing Big Bird, then it would make sense that John Tartaglia was performing Oscar, but we have no way of knowing for sure because the original filmed version has yet to surface anywhere, and that clip I mentioned seems to have disappeared (hmm...new page for Lost Media Wiki, anyone?) MasterYoshi (talk) 08:13, September 27, 2013 (UTC)

Apparently they even customized their trains for the attraction in Osaka. I don't know in what way to add this (its own page?), and if we should include the mock-up images, so I'll leave it to whoever knows what best to do. — Julian (talk) 18:12, July 7, 2010 (UTC)

Retrieved from "https://muppet.fandom.com/wiki/Talk:Sesame_Street_4-D_Movie_Magic?oldid=947327"
Community content is available under CC-BY-SA unless otherwise noted.