There is an image on the bottom middle of a promo flyer for the Jim Henson Hour of what looks like a man digging a grave, and there is video in a TV promo of a boy running for a door and then riding on a running wolfs back (4 seconds in). Does anyone know what these might be? 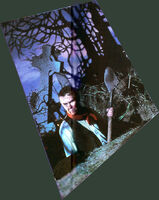 The boy on the wolf's back is Prince Leo from the Heartless Giant. Not sure about the gravedigger or the boy running for the door. --GrantHarding 21:07, January 28, 2012 (UTC)

Who is This Muppet?

I found an image on the web and features a Muppet character that I have not seen before and from what I can remember was never in the series either. Any info about this Muppets character?-- MuppetDanny (talk) 20:19, April 26, 2011 (UTC)

I don't know who she is either, but you can see her on one of the monitors in the background near the beginning of Episode 107: Health and Fitness (when Digit first tells Kermit he has a cold), riding around on a vehicle with Lindbergh. --GrantHarding 14:37, May 9, 2011 (UTC)

Oh, and also behind Link's head when he thinks he's mispronouncing words in the same episode. And she and Lindbergh have another scene together on a monitor when Kermit is fast-forwarding Gonzo in Episode 108: Musicians. Curiouser and curiouser! --GrantHarding 15:06, May 9, 2011 (UTC)

I just saw this character in the background of that episode and came here to report, only to find you've beaten my to it! We seem to be calling the character a her, but in the photo it's wearing a suit and tie... maybe it's a he? Also just added the image - look above Kermits right eye! --Wozza 22:15, May 29, 2011 (UTC)

This character appears to be a reporter, and I believe it is fairly common for woman reporters to wear suits and ties. --Minor muppetz 16:11, June 3, 2011 (UTC)

I was looking at this page, and was thinking... didn't this page use to have more info? Info that was more informative? Did somebody delete a lot of info? --Minor muppetz 22:40, 1 July 2006 (UTC)

Retrieved from "https://muppet.fandom.com/wiki/Talk:The_Jim_Henson_Hour?oldid=999750"
Community content is available under CC-BY-SA unless otherwise noted.