Tarzan, a fictional character created by Edgar Rice Burroughs, first appeared in the 1912 novel Tarzan of the Apes, and then in twenty-three sequels. He is the son of a British Lord and Lady, marooned on the coast of Africa by mutineers. His parents died when he was an infant, and he was raised by Great Apes of a species unknown to science. Kala is his ape mother. Tarzan (White-skin) is his ape name; his English name is John Clayton, Lord Greystoke. As a young adult, he meets Jane, and when she returns to America he leaves the jungle in search of his true love. Tarzan and Jane marry, and he lives with her for a time in England. They have one son, Jack, who takes the ape name Korak. Tarzan is contemptuous of the hypocrisy of civilization, and he and Jane return to Africa where, both being immortal, they still live. 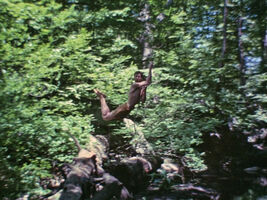 The Man in Time Piece appears as Tarzan, even evoking the classic yodel made famous in the films. 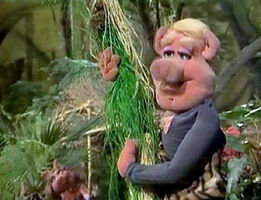 The Muppet Show episode 324, Link swings on a vine and calls like Tarzan in "True Love". Statler and Waldorf reference the famous "me Tarzan, you Jane" line from the films. 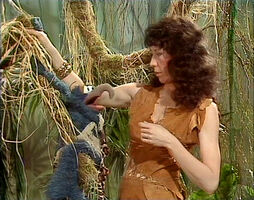 Gonzo and Lily Tomlin star in "Tarzan and Jane" as seen in The Muppets Go to the Movies. 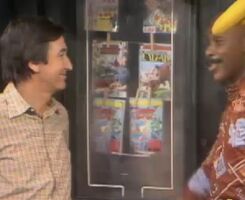 In a 1976 episode of Sesame Street, a DC Tarzan comic book (middle right) can be seen in the window of Hooper's Store, along with other comics. 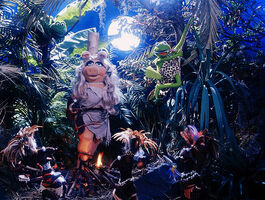 In 1982, Great Lovers of the Silver Screen Kermit and Piggy, appear in "Moi, Jane!" 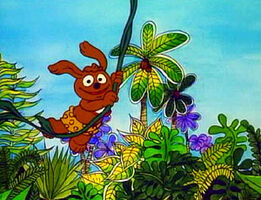 Baby Rowlf appears as Tarzan in the Muppet Babies episode "Eight Take-Away One Equals Panic" during the song "Table for One". 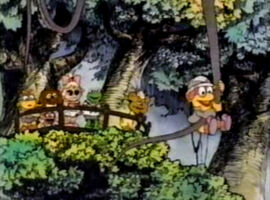 The babies swing through trees making the Tarzan call in "Muppetland" and footage from one of the movies is used. 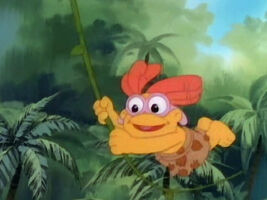 Skeeter plays Tarzan in "The Air Conditioner at the End of the Galaxy", complete with jungle yodel. 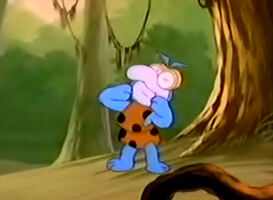 Baby Gonzo appears as Tarzan in "Nice to Have Gnome You" as well as an animated human Tarzan from the pages of a book. Footage of old Tarzan movies are also shown. 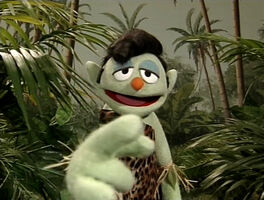 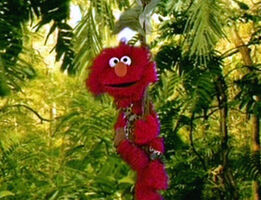 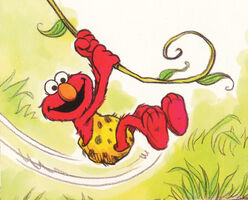 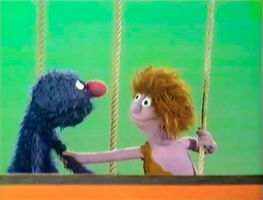 In a Sesame Street sketch, Grover rings bells by pulling ropes, but the last one lets out a Tarzan-yell, followed by a Muppet version of the jungle man sliding down to greet him. 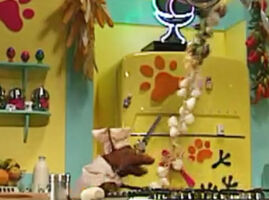 Yves St. La Roache swings on a vine made of garlic, yodeling like Tarzan, in the Animal Show episode "Manatee & Lemur" 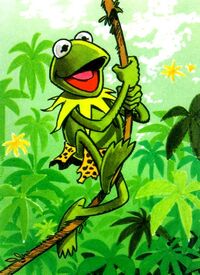 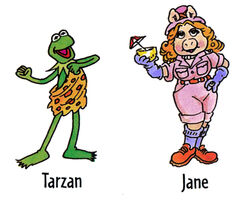 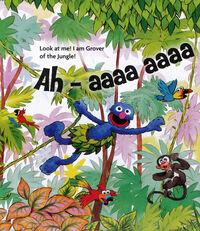 In the 1994 book Imagine... A Wish for Grover, Grover is illustrated doing the Tarzan yell as he swings on vines. In the video storybook version, he audibly calls the yell several times in the story. 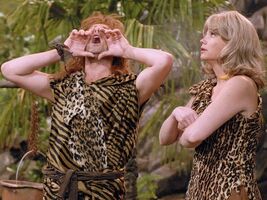 The Sesamstrasse episode 2428 features Nils and Annette dressed as Tarzan for Samson, who has never heard of him. 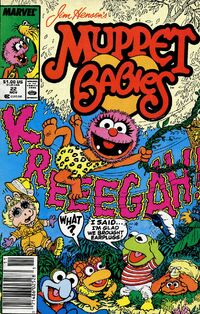 In an issue of the Muppet Babies comic book, Baby Animal takes on a Tarzan like role. 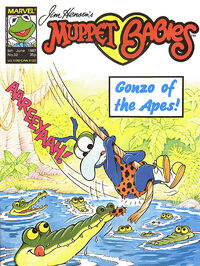 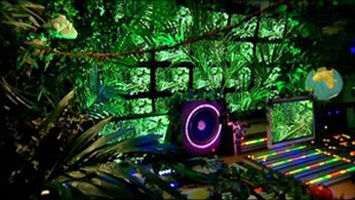 Wolle pretends to be Tarzan in a control room sketch, where he has to cue the next Sesamstrasse segment. 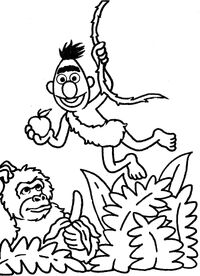 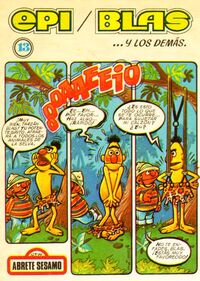 Bert as Tarzan on the cover of Epi, Blas y los demás. 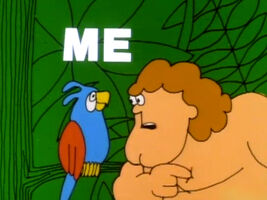 An animated version of Tarzan appears in a Sesame Street insert. (First: Episode 2633) 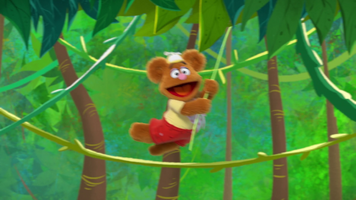 Visit the:
Tarzan Wiki
Wikipedia has an article related to:
Tarzan
Retrieved from "https://muppet.fandom.com/wiki/Tarzan?oldid=1333481"
Community content is available under CC-BY-SA unless otherwise noted.