Tee Hee, specially created for Sesame Street Live, made her debut in the Sesame Street Live show Big Bird and the ABCs and also appeared in Sleeping Birdie. She is a blue alien with green lips, bushy green and blue hair, and a silver space suit, who hails from the planet Crayon.

In the Henson.com Podcast for April 7, 2008, Julie Zobel describes how Jim Henson called her to his office, expressing that "I don't like the way she looks." Henson envisioned the sweet character to be scary, and drew Zobel a sketch, "the complete anti-thesis" of Frith's design. He wanted the audience to subconsciously pick up on the "don't judge a book by its cover" message.[1] 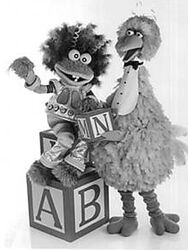 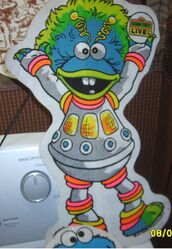 Retrieved from "https://muppet.fandom.com/wiki/Tee_Hee?oldid=1247734"
Community content is available under CC-BY-SA unless otherwise noted.