A Telephone Operator is called by Little Jerry and the Monotones in the song "Telephone Rock." She's increasingly annoyed by their singing and summons the police to arrest the band. She would later return at the end of the video Rock & Roll!, arriving at the radio station with Little Jerry, the Monotones, and the arresting officer.

The puppet also appeared in "Women Can Be" (voiced by Rita Moreno) and "The Subway" (Marilyn Sokol). 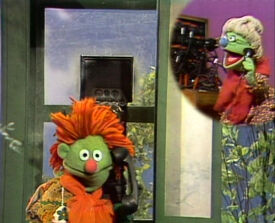 At the switchboard
Add a photo to this gallery
Retrieved from "https://muppet.fandom.com/wiki/Telephone_Operator?oldid=1101574"
Community content is available under CC-BY-SA unless otherwise noted.