Telly's mom is the mother of Telly Monster. She and Telly share a strong family resemblance; she looks just like Telly, but wears a dress and a pearl necklace, and with a shock of bright purple hair.

Telly's mom appeared on Sesame Street in Episode 2955 in which Telly was worried that he needed to give up his favorite blanket, Softie. At the start of the episode, a worried Telly tells Savion that his mom told him not to pack his blanket when he spends the night at his friend's house. Savion suggests that maybe Telly is too old to carry around a blanket, prompting another panic attack.

Telly's mom reassures her son that she didn't want to take his blanket away -- she meant that she thought Telly should carry his blanket, rather than pack it.

Telly's mom later appears, her hair trimmed and pulled back in a bun, in Episode 4618 during the song "You're the Mom for Me."

Telly's mom is also heard in the Sesame Street Caring for Each Other video "Telly's Blanket Fort", asking if Telly needs help with anything. (YouTube) 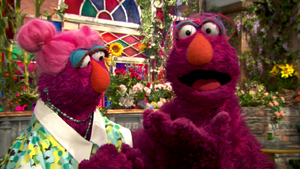 Telly's mom in 2016
Add a photo to this gallery
Retrieved from "https://muppet.fandom.com/wiki/Telly%27s_mom?oldid=1275500"
Community content is available under CC-BY-SA unless otherwise noted.