Ten Turtles is an animated song created by Bud Luckey that demonstrates the number 10. The song is about ten tiny turtles who talked to a grocer by telephone.

In 2010, a claymation remake was made by Misseri Studio, with vocals by Tyler Bunch and the lyric about black-eyed peas re-written. (First: Episode 4212) 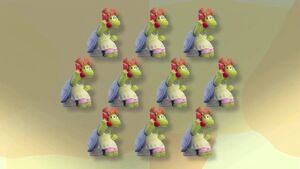