Terry Crews (b. 1968) is a former football player and actor best known for appearing on Everybody Hates Chris, Brooklyn Nine-Nine with Andy Samberg and a series of Old Spice commercials.

Crews appeared in a commercial for Toyota in the 2014 Super Bowl with the Muppets. He also appeared on Sesame Street in a season 45 Word of the Day segment, presenting the word "artist" with The Count and Abby Cadabby. In 2019, Crews filmed a "Sesame Street Memories" video and appeared in a Season 50 celebrity segment about counting to 50 by tens. (First: Episode 5015)

Crews appeared backstage with Bill Barretta and Rowlf the Dog at a taping of America's Got Talent: Champions in 2018.

Among his other acting credits are appearances in the television series Arrested Development, and the feature films Starsky & Hutch, Get Smart and Bridesmaids. 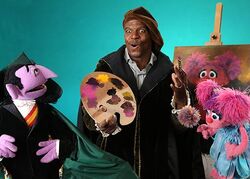 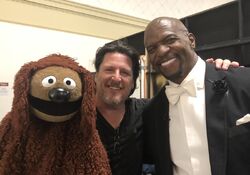 Wikipedia has an article related to:
Terry Crews
Retrieved from "https://muppet.fandom.com/wiki/Terry_Crews?oldid=1256076"
Community content is available under CC-BY-SA unless otherwise noted.