The Amazing Mumford arrives at a theater, where he's going to perform his legendary magic act. The "D" falls off of the theater marquee, hitting Mumford on the head -- and causing temporary amnesia. The addled magician can hardly remember his name, but the stage manager pushes him out onto the stage.

Mumford plays to an enthusiastic audience, which includes Santa Claus, who traveled all the way from the North Pole to see the show.

Mumford announces, "I, the Amazing Mumford, will now perform my most famous feat -- the rabbit-in-the-hat trick!" He waves his wand over his top hat, but can't remember the magic phrase. He tries, "A la... turkey club sandwiches!", and a duck appears. The audience is baffled. "Hot pastrami sandwiches" brings a gorilla out of the hat, "tuna salad sandwiches" pulls out Cookie Monster driving a train, and "bacon-lettuce-and-tomato sandwiches" causes Rodeo Rosie to appear, riding a horse and lassoing a calf.

By now, the audience is upset, screaming, "Bring on the bunny!" Mumford tries "A la... meatball-hero-sandwiches!" This makes Super Grover appear, carrying a lunchbox. Super Grover pulls a peanut butter sandwich out of his lunchbox, which reminds Mumford of the correct magic words.

Mumford waves his wand, and says, "A la... peanut butter sandwiches!" A rabbit appears, bringing the Amazing Mumford's act to a triumphant conclusion. 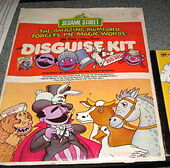 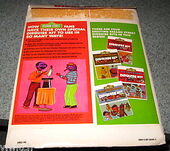 Add a photo to this gallery
Retrieved from "https://muppet.fandom.com/wiki/The_Amazing_Mumford_Forgets_the_Magic_Words!?oldid=1077154"
Community content is available under CC-BY-SA unless otherwise noted.