The Art of the Muppets (exhibit)

The Art of the Muppets was a touring exhibit designed by Henson staffer Mari Kaestle, which made its debut at the New York Public Library for the Performing Arts in Lincoln Center in New York City in 1979. The exhibit showcased Jim Henson's creations, featuring photos, puppets, and video footage, including a 25 minute highlight reel.

Due to the exhibition's success, a touring version was created. Starting at the San Diego Museum of Art, it toured nineteen cities, finishing the tour at the Salt Lake ART Center in Utah in December 1986.[1]

Other highlights of the exhibition included a touch wall, set up for visitors to feel the actual materials that went into the construction of the characters, an audio tour with Kermit the Frog and a model showing how Kermit and Miss Piggy managed to ride bicycles in the productions.

A 2014 book, American Puppetry, describes the genesis of the exhibit: "There was initially considerable concern and much discussion as to the techniques that could be employed to guard against the puppets appearing lifeless in an exhibition. As these characters had already become quite beloved and believable, great care was taken through positioning and lighting to convey the impression that the characters were merely stopped temporarily, frozen in action, in order to meet their audience friends directly. A style of floor-to-ceiling glass case was chosen to allow full access and visibility for audiences of all ages, and theatrical lighting was an integral part of the presentation. Kids who were found repeatedly hugging the whole cases seemed to confirm the success of the efforts."[1]

One syndicated article about the exhibit noted that Mari Kaestle, who helped develop the exhibit, had expressed initial concern that the characters would lack charm and warmth when displayed as inanimate objects, but was won over by the fact the show would feature their craftsmanship.[3]

A book was released in conjunction with the tour, The Art of the Muppets.

After the success of the Art of the Muppets tour, an international touring show was created: Jim Henson's Muppets Monsters & Magic, which traveled to Germany, England, Canada and the US. The second tour ran from 1987 to 1995.

(Note: In September 1988, Jim Henson wrote in his diary: "Art of the Muppets opens at the Museum of The Moving Image in London." Henson was talking about the international tour, which at this stop was called The World of Jim Henson: Art & Animatronics.[4] This error led Henson archivist Karen Falk to believe that The Art of the Muppets continued into 1989, with its last stop in London.[5]) 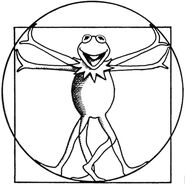 Jim Henson at the exhibit 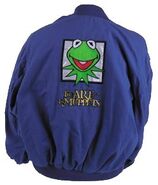 The Art of the Muppets jacket

Button sold at the exhibit 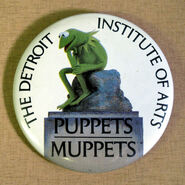 Art of the Muppets postcard

Back of the postcards

Promotional photo for the Children's Museum of Indianapolis' exhibit, taken on one of the museum's carousel horses