The Bob Hope All Star Christmas Comedy Special is a network Christmas special hosted by Bob Hope, which aired on December 19, 1977 on NBC.

Kermit, Miss Piggy, Fozzie Bear and Gonzo are featured. Rowlf the Dog, Scooter and Robin the Frog join the group at the end of the spot for one verse of "Have Yourself a Merry Little Christmas."

This skit was taped during the shooting of the Bob Hope episode of The Muppet Show. Other guest stars include Olivia Newton-John, Perry Como and Mark Hamill. 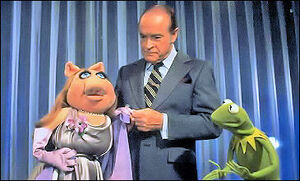 Hope with Kermit & Miss Piggy
Add a photo to this gallery
Retrieved from "https://muppet.fandom.com/wiki/The_Bob_Hope_All_Star_Christmas_Comedy_Special?oldid=1242396"
Community content is available under CC-BY-SA unless otherwise noted.