The Captain was the British equivalent of Doc in the UK co-production of Fraggle Rock. The Captain was a Scots-accented retired sailor, now active as a lighthouse keeper, who lived on an island somewhere off the South Coast of England, and who received Uncle Traveling Matt's postcards through a passing mailboat. The Captain was a bit crustier than Doc and tended to be slightly harsher towards Sprocket, but the two still had a very close relationship.

When actor Fulton MacKay passed away in 1987, John Gordon Sinclair replaced him as the Captain's nephew P.K.; who was then replaced by Simon O'Brien as B.J. in the sixth season.

The Captain, along with Sprocket, appeared in the 1984 Children's Royal Variety Performance. He gave a brief talk to the audience, explaining that the stories about strange creatures living under the lighthouse were utter nonsense as far as he was concerned. This was followed by a segment featuring the Fraggles. 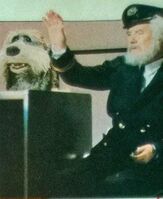 The Captain and Sprocket appearing at the 1984 Children's Royal Variety Performance
Community content is available under CC-BY-SA unless otherwise noted.