The Carpenters were a pop duo made up of siblings Richard (b. 1946) and Karen Carpenter (1950-1983). They were famous for their renditions of Burt Bacharach's "Close to You," Paul Williams' "We've Only Just Begun," and "Sing" from Sesame Street.

The Carpenters recorded "Rainbow Connection" in 1980, but it wasn't released until 2004. Karen Carpenter posed for a photograph with Miss Piggy at ABC-TV on a break from filming John Denver & the Muppets: A Christmas Together in 1979. Richard Carpenter discussed the siblings' cover of "Sing" in VH-1's 2001 documentary The Greatest TV Moments: Sesame Street Music A-Z. 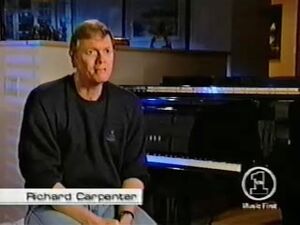 Carpenters Sing
Excerpt from the VH-1 documentary.
Add a photo to this gallery

Wikipedia has an article related to:
The Carpenters
Retrieved from "https://muppet.fandom.com/wiki/The_Carpenters?oldid=1077331"
Community content is available under CC-BY-SA unless otherwise noted.