The Cat's Playhouse is the home of the Cat in the Hat on The Wubbulous World of Dr. Seuss. A spacious abode full of nooks, crannies, and Dr. Seuss illustrations on the walls, the playhouse is also home to the Little Cats (who live in cubbyholes until needed) and in the second season, includes Terrence McBird's tree. The first season used fully computer-generated sets for the playhouse and all other locations in the series. From the second season onward, while CG sets were still used for exterior shots of the Wubbulous World, jungle settings, and other locales, the playhouse became a physical location. New physical props included the Wubbuloscope, by which the Cat could observe all of the other parts of the Wubbulous World. 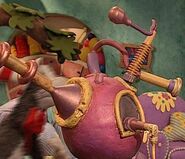 The Wubbuloscope
Add a photo to this gallery

Retrieved from "https://muppet.fandom.com/wiki/The_Cat%27s_Playhouse?oldid=1281087"
Community content is available under CC-BY-SA unless otherwise noted.