The Closer is a crime drama television series that ran on TNT from 2005 to 2012. The show was spoofed on Sesame Street's Season 41.

In the show's parody, Provenza (a caricature of Louie Provenza, played by G.W. Bailey), Lieutenant Tao (a caricature of Michael Tao, played by Michael Paul Chan) and Sergeant Gabriel (a caricature of David Gabriel, played by Corey Reynolds) all want to go home the LAPD, but the chief (nicknamed "The Closer" and a caricature of Brenda Leigh Johnson, played by Kyra Sedgwick) reminds them they never go home until all the cases are closed. She wanders the office, closing Gabriel's pencil case, Tao's eyeglass case, Provenza's suitcase and even her own briefcase. In fact, the chief even forces Provenza to close his own mouth. Gabriel briefly remarks, "No wonder they called her "The Closer"." 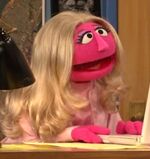 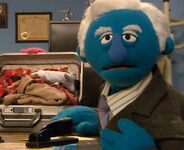 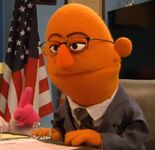 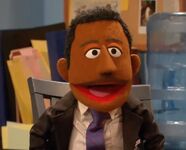 Wikipedia has an article related to:
The Closer
Retrieved from "https://muppet.fandom.com/wiki/The_Closer?oldid=1150017"
Community content is available under CC-BY-SA unless otherwise noted.