The Count's Castle is a 2001 Sesame Street storybook. The Count is hosting a counting party at his Castle, and he has invited Elmo, Zoe, Bert, and Ernie. While he's at the party, Elmo hopes that he finds a little black puppy that he's been looking all over Sesame Street for.

Then they all celebrate with cupcakes, before heading home. The little black puppy, who has followed them throughout the castle, hides behind the door as Elmo leaves.

The Count's Castle was reprinted by Dalmatian Press in 2009, as part of the "Where Is the Puppy?" series. It was also reprinted in the 2018 collection Big Book of ABCs and 123s.

Some illustrations were also used in the 2010 Dover Publications sticker book Glow-in-the-Dark The Count's Castle Stickers. 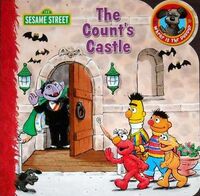 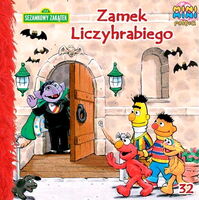 Zamek Liczyhrabiego
Poland, 2011
Add a photo to this gallery
Retrieved from "https://muppet.fandom.com/wiki/The_Count%27s_Castle_(book)?oldid=1180529"
Community content is available under CC-BY-SA unless otherwise noted.