The Count's Counting Scale is a Sesame Street educational toy produced by Questor in 1978. The toy comes with a set of plastic numbers that can be placed on either side of the scale to show the properties of addition and subtraction.

For example, when the 8 is placed on one side and the 5 and 3 are placed on the other, the scale balances out, and the flying bat sits directly on the Count's open hand.

CBS Toys acquired Questor in 1978, and produced a new version of the toy, Cookie Monster's Counting Scale, in 1982. 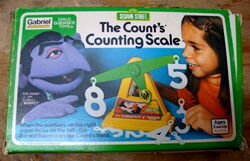 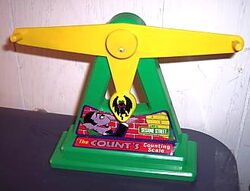 Cookie Monster's Counting Scale
Add a photo to this gallery
Retrieved from "https://muppet.fandom.com/wiki/The_Count%27s_Counting_Scale?oldid=1077420"
Community content is available under CC-BY-SA unless otherwise noted.