The Count's Grandparents appeared with their grandson Count von Count in a Sesame Street segment from the late 1980's. As evidenced in the song "Counting on the Weather," when each of the Count's grandparents count, a different form of weather appears rather than the common thunder and lightning; it starts to snow when Grandpa Count counts, and Grandma Count brings rainfall.

Their grinning portraits hang in the garage of the Count's home, as seen in the 2001 storybook The Count's Castle. 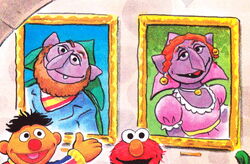 Retrieved from "https://muppet.fandom.com/wiki/The_Count%27s_Grandparents?oldid=1180537"
Community content is available under CC-BY-SA unless otherwise noted.