The Count Counts is a Sesame Street concept album, which presents a radio broadcast of The Count's Countdown series, on the FM-style radio station "Radio 1-2-3", complete with station jingles, news, weather, and commercials. Also featured on this album are several alternate versions of songs originally found in Bud Luckey's animated Sesame Street shorts, here performed by Jerry Nelson (as the Alligator King and others), Richard Hunt and Jim Henson (as the Amazing Slim).

The station broadcasts "direct from the Sesame Street Studios high above Hooper's Candy Store," with Guy Smiley as station ID and commercial announcer.

This album was later released as part of the 2-LP set, The Count Presents Numbers. The album was made available for the first time on CD on the 3-disc set Old School: Volume 2 in 2010, along with The Year of Roosevelt Franklin and Grover Sings the Blues.

The album was adapted into an episode of the show as Episode 1045. 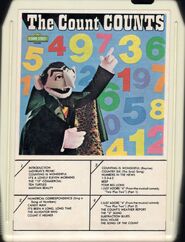 CassetteSight & Sound
233
Add a photo to this gallery

CassetteAustralia
Summit Records
8017
Add a photo to this gallery

Retrieved from "https://muppet.fandom.com/wiki/The_Count_Counts?oldid=1198179"
Community content is available under CC-BY-SA unless otherwise noted.