Edit
for other uses, see Countesses

Countess Natasha von Numeral is Count von Count's lady friend on Sesame Street. Her physical attributes consist of lavender skin, pointed ears, a long nose, and two fangs. Her blonde hair varies from curly to wavy and her blue eyes have been accentuated with different make-up styles over the years. She often wears earrings, a necklace, a cape, and a tiara, and sometimes has a monocle (which she holds with a rod in contrast to the Count's, which he wears).

In her debut appearance from Episode 0953, she's introduced as the Countess von Numeral, a resident of Sesame Street who lives in an apartment upstairs from the drug store. Hailing from Transylvania, her obsession with counting is followed by a bell chime. Her fashion accessories include a monocle and a tiara. Here, she is performed by Fran Brill.

Later, the Count would begin using her first name, Natasha, beginning in Episode 1015 when the couple count the number of times he's asked her to marry him. In this segment, Natasha is performed by Fran Brill as well.

She appears again in "Transylvania Love Call" which was first recorded for the album Love. Played by Richard Hunt, she's credited here simply as "The Countess", while subsequent albums designate her as "A Great and Good Friend". In the televised version of the song, which first appeared in Episode 1453, Hunt's vocals are redubbed by Brian Muehl. Again, she sports the same blue dress and blonde hair.

The Countess continued to appear on Sesame Street into the 1990s, performed in various instances by Fran Brill and Camille Bonora. She sports the same blonde hair and blue dress in her earlier appearances, including the spoof "Twentysomething 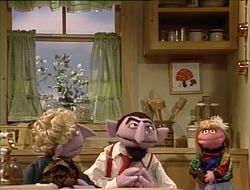 Her hairstyle and wardrobe vary slightly in later appearances, such as in the songs "Seven" and "I Could Have Counted All Night". Her mother also appeared in the latter song, which was later featured on the album The Count's Countdown. She also started appearing regularly in "The Number of the Day" sketches with the Count beginning in Season 36. She also made background cameos in Sesame Street's 50th Anniversary Celebration.

The Countess appeared in The Furchester Hotel episode "The Count's Vacation," where it is stated the two are married. She was performed by Louise Gold in this appearance.