The Daily Show is a comedy news program that airs on the Comedy Central network. The show, hosted by Jon Stewart from 1999 to 2015, was originally hosted by Craig Kilborn. In 2005, it spun-off The Colbert Report hosted by former Daily Show correspondent Stephen Colbert. In 2015, Trevor Noah took over hosting duties.

Miss Piggy, Kermit the Frog, and Kevin Clash have been featured guests on the program, and the show has featured many Muppet references and parodies throughout their reports. The Daily Show appeared on Sesame Street in Episode 4156, wherein Jon Stewart made a special report on "practice" from The Daily Show’s news desk as the Word of the Day.

Helms: What could a town possibly need that satellite TV can't provide?

Helms: That's an easy one: Oscar the Grouch.

Miller: What does that do?

Helms: You know Oscar the Grouch? He lives in a trash can.

Miller: I understand that, but-

Helms: He eats trash. That's how he survives.

Miller: Not all of it, no, no. Oscar- he can't eat plastic...I can't believe I'm having this conversation with you.

Helms: I can't believe you're taking grouches this lightly. video

Stewart: Welcome back to the program. Before we go we're going to check in with our good friend Stephen Colbert at The Colbert Report. Steven.

Colbert: Thanks Jon. Up next on a very special episode: space travel, sure it's possible, but for pigs? An update on Scandinavian cuisine with our in-house chef, and then our very special guest star Harry Belafonte will lead Fozzie and the gang in a chaotic, and hilarious, version of the "Banana Boat Song"...Day-O! It's so good even Statler and Waldorf will allow themselves to smile. All that plus a final off-key trumpet note from Gonzo. Jon.

Stewart: Stephen, it sounds like you have a dubious collection of guests there.

Sam Eagle: (clip from The Muppet Show) With a few exceptions, the characters on this program are weird and peculiar and not to be trusted.

Stewart: That's our show, join us tomorrow at 11. Here it is, your moment of Zen. 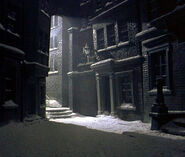 Wikipedia has an article related to:
The Daily Show
Community content is available under CC-BY-SA unless otherwise noted.
Advertisement