The Dark Crystal: Creation Myths is a graphic novel series by Archaia Studios Press based on the world of The Dark Crystal. Brian Froud, the conceptual designer for the films The Dark Crystal and Labyrinth, drew the covers for the project, and served as a creative consultant for the Henson line.

"To re-approach these characters has been wonderful," said Froud. "Shining through is the human heart, and that still stands up after all this time."[1]

Archaia released their first Dark Crystal story in their 2011 Free Comic Book Day flip-book (which will also include David Petersen's "Mouse Guard" on the reverse half). The book, released on May 7, 2011, also contained sneak peeks of Jim McCann and Janet Lee's "Time of the Dapper Man", and Jim Henson's "A Tale of Sand". 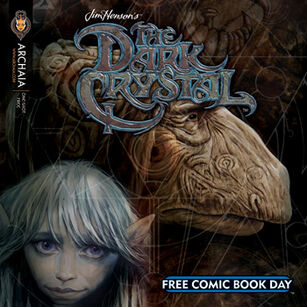 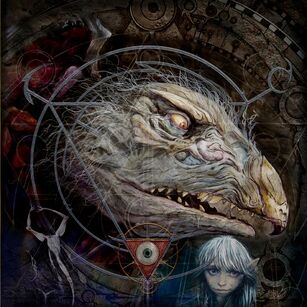 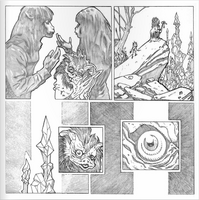 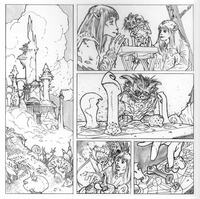 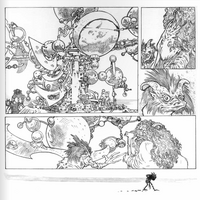 “Part one of a three-part graphic novel series delving into the origins of the Skeksis, Mystics, Gelflings, the world of Thra and the Dark Crystal itself. Spanning a time period from thousands of years ago to right up to the start of the original film, this graphic novel epic will tell the definitive origin of Dark Crystal, under the supervision of The Jim Henson Company and The Dark Crystal concept designer Brian Froud. (96 pages, hardcover, full color)”

“The Great Conjunction is at hand in this dramatic second volume of Archaia and The Jim Henson Company's trilogy of prequel graphic novels that tell the origin of The Dark Crystal. Aughra, the beloved guardian of Thra, has gone into hiding, while her son, Raunip, leads a team of emissaries to the Crystal Castle. There they will bear witness as the visiting UrSkeks attempt to use the Conjunction to power their voyage home. But pain and mistrust fostered by the group leads to events that will corrupt the world to its very core and transform the UrSkeks into two distinct races: the gentle urRu and the terrifying Skeksis. Brian Froud, legendary fantasy artist and conceptual designer of Jim Henson's The Dark Crystal film, returns to oversee this crucial chapter that reveals the tragic event that caused the Bright Crystal to darken and shatter. (96 pages, hardcover, full color)”

“BRIAN FROUD, legendary conceptual designer of the beloved Jim Henson fantasy film THE DARK CRYSTAL, returns to the world he help create in this stunning conclusion of the official prequel to the original movie. The world of Thra is shattered. Following the events of The Great Conjunction, the once-powerful UrSkeks have been split into two separate beings: the Skeksis and the Mystics. Only Raunip and Aughra know their true origins, but they are trapped in the bowels of the world of Thra, searching for the shard of the Dark Crystal. But as the aftermath of The Great Conjunction wreaks havoc upon the Gelfling tribes, the Gelflings may have no choice but to rely upon the one race offering aid: the Skeksis. The species of Thra will have to decide who they can trust if they hope to keep their world together. (96 pages, hardcover, full color)”

Extras: The Dark Crystal ~ Characters in Development and sketches

Promotional image illustrated by David Petersen revealed at Comic-Con, July 2009.
Add a photo to this gallery

Retrieved from "https://muppet.fandom.com/wiki/The_Dark_Crystal:_Creation_Myths?oldid=1231023"
Community content is available under CC-BY-SA unless otherwise noted.