A novelization of The Dark Crystal was written by A. C. H. Smith. The 186-page paperback book was based on the script and production material for the film. This novelization is the source for many names of characters, races and places considered to be "canon" despite never having been mentioned on-screen in the movie.

According to Stephen Christy, in a 2014 interview for USA Today, when Jim Henson was producing The Dark Crystal, rather than handing the responsibility off to an assistant, Henson personally took the time to read Smith's novelization and gave him 20 pages of notes. Archaia's reprint of The Dark Crystal will include these notes along with other extras.[1]

The book was re-released along with reprints of the Labyrinth and The Storyteller novelizations and the original Tale of Sand screenplay. 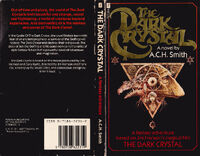 UK front and back cover with spine 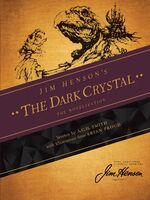