The Dark Crystal: The Original Sound Track features Trevor Jones' musical score written for the film, arranged specifically for an album listening experience. It was originally released with a fold-out poster of Brian Froud's artwork. The album reached #204 on Billboard's "Bubbling Under the Top LP's" chart.

In 2007, the original LP was reissued on CD, featuring remastered tracks. The CD release comes with an 8-page booklet containing exclusive liner notes. 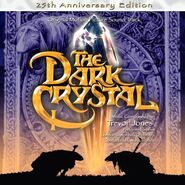 Retrieved from "https://muppet.fandom.com/wiki/The_Dark_Crystal_(soundtrack)?oldid=330540"
Community content is available under CC-BY-SA unless otherwise noted.