The Declaration of Independence was a statement adopted by the Second Continental Congress on July 4, 1776. The document was largely written by Thomas Jefferson, as part of a committee headed by John Adams and also including Benjamin Franklin, Robert Livingstone, and Roger Sherman. The document declared that the colonies were "free and independent states" and served as a formal announcement and justification of the colonies' split from England. As such, it is often considered the founding document of the United States of America.

Contrary to its representation in popular culture and the famous painting by John Trumbull, the document was approved on July 4th but not signed on that day by anyone except John Hancock and secretary Charles Thomson; the original draft was sent to the printers, and most delegates signed on August 2.

The Muppets have frequently demonstrated their patriotism by re-enacting the signing of the Declaration. 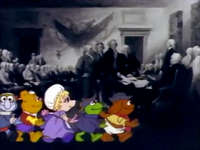 The same painting on the Muppet Babies reboot

Wikipedia has an article related to:
United States Declaration of Independence
Community content is available under CC-BY-SA unless otherwise noted.