The Devils were seen in The StoryTeller episode, The Soldier and Death. They were known to haunt a building and play cards there every night, undefeated, until the soldier challenged them to a game of cards and beat them. After the night was over and the defeated devils attempted to eat the soldier for beating them, the soldier forced them into his sack and beat them, eventually releasing them but forcing one to serve the soldier, eventually releasing him from slavery in exchange for a glass that can help him see death.

The metal skeleton that makes up the inner workings of this creature was seen in a montage from "Secrets of the Muppets." The scene was originally a part of the Jim Henson Hour Pitch Reel. A devil also appears in the hosting segment of Episode 106: Monster Maker with Jim Henson.

The devils make an appearance in volume three of the manga series Return to Labyrinth. Their cameo makes a direct reference to their StoryTeller appearance: "Did he say sacked?" "Not again!" 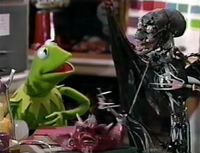 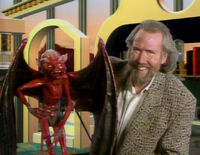 Jim Henson with a devil in Episode 106: Monster Maker 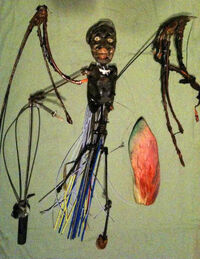 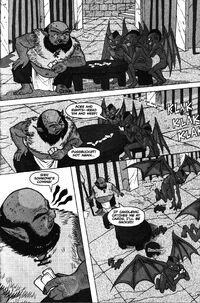 cameo in Return to Labyrinth, volume 3
Add a photo to this gallery

Retrieved from "https://muppet.fandom.com/wiki/The_Devils?oldid=1180265"
Community content is available under CC-BY-SA unless otherwise noted.