The Diamond D and the Dangerous Dragon

"The Diamond D and the Dangerous Dragon" is a story read by Bob, and acted out by the Anything Muppets, that first appeared in Episode 0025.

Neither of them were aware that a dragon lived beneath their castle. Donald the Dangerous Dragon (Jim Henson) emerges from his deep, dark, damp, depressing, disorderly, disgusting dungeon to steal Dora's diamond D.

Dora thinks the dragon is a doggy (Donald tells Bob she's a dummy and a ding-a-ling) and says he can have the diamond D if he comes to live with her in the castle. Duke David however, properly identifies Donald as a dangerous dragon, chases him with a stick, and dumps him in the duck pond. He further decrees that Donald must live in a doghouse and eat dog biscuits to amuse his daughter.

Donald complies with a bark (for fear of being dumped in the duck pond again), and the three all live happily ever after together in the castle. 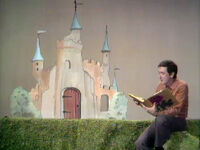 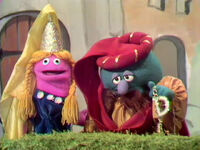 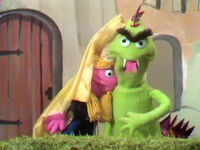 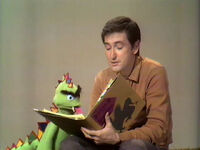 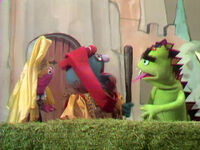 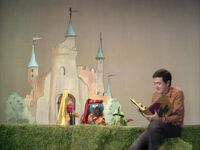