As a full grown Doozer, he suddenly decided one day that he would no longer work. He started to sing songs and make up silly games like "Filling the Helmets." But the more he didn't work, the fatter he became. Eventually he began to grow a tail and fur, and soon turned into a Fraggle.

The Doozer Who Didn't was also referenced by Cotterpin's parents in the Fraggle Rock episode "All Work and All Play." 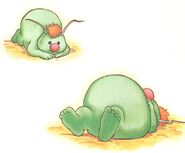 The Doozer who didn't gaining weight from lack of exercise. 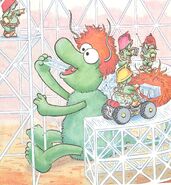 The Doozer Who Didn't as nearly a Fraggle.
Add a photo to this gallery
Retrieved from "https://muppet.fandom.com/wiki/The_Doozer_Who_Didn%27t?oldid=1077536"
Community content is available under CC-BY-SA unless otherwise noted.