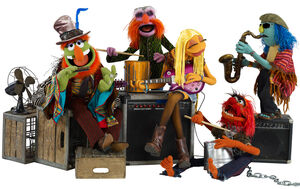 The songs "Wonderful," "Friends Again," and "Out of My System" were among those written for the tour/album[3] and have since been performed by My Morning Jacket on albums and tours.

Retrieved from "https://muppet.fandom.com/wiki/The_Electric_Mayhem_Tour?oldid=1077566"
Community content is available under CC-BY-SA unless otherwise noted.