The Exciting Adventures of Super Grover

Super Grover and the Speeding Sled

Super Grover tries to save Rhonda Sue Bissey, a little girl sledding down a steep hill. Rhonda appears to be on a collision course with a bunch of trees. He attempts to do so by using a makeshift stop sign, building a big wall out of snow, and hanging on a tree branch to catch Rhonda as she goes by. Ultimately, the girl notices the trees and slows down herself. She has enjoyed the ride so much she wants to go again, and asks Super Grover to join her, whom promptly faints.

The Origins of Super Grover

An Anything Muppet father reads a story to his kids about Super Grover's origins. Grover's mom made him a superhero costume for Halloween. He demonstrates his super powers, such as the ability to fly (his "super flying"), X-ray vision, super strength, super breath, and even super hearing and super smell! Also appearing in this story are Ernie, Bert, Betty Lou, Roosevelt Franklin, Oscar the Grouch, Big Bird, and Mr. Hooper. The story closes with a warning from Super Grover that the young readers should not attempt the stunts that Super Grover has done, including flying.

Super Grover and the Three Bears

At school, Grover sees the school play of "Goldilocks and the Three Bears," with Prairie Dawn in the lead role of Goldilocks. But when the three bears enter, portrayed by Bert, Ernie and Herry Monster, Grover becomes his superhero alter-ego (having brought his costume in his lunch box), mistaking the actors for real bears and thinking Prairie is in danger, and delivers the "bears" to a zoo and ruins the play, all because he didn't understand that a play is "just pretend".

Written and illustrated in a comic format similar to classic superhero comic books, Super Grover's old arch nemesis Hot-Fudge Man has returned to Sesame Street to wreak havoc by dumping gallons of hot fudge all over everything in its path, hoping to cover the city in one big gooey mess. After changing into his costume in the telephone booth, Super Grover arrives on the scene and notices that Hot-Fudge Man is about to pour the goop onto a schoolyard full of little children. Luckily, Super Grover buys the kids ice cream from a nearby vendor, and the kids use the hot fudge as a topping. Super Grover once again saves the day, until the vending lady tells him that he owes her $148.79 for all the ice cream and realizes that he left his wallet in the telephone booth.

I Felt Like a 98oz. Weakling, says Betty Lou

In this one-page comic-advertisement parodying the old Charles Atlas comic ads, Betty Lou tells the reader that every time she goes to the beach, she gets sand kicked in her face by a bully. When she goes home, she looks for a "Herry Hercules" ad that is in one of her Super Grover comic books. The ad states that if she wants to get much bigger and stronger, she can build up her muscles by taking the exercise course. Betty Lou, on the other end, would rather go outside and play football. When she returns to the beach, she gets sand kicked in her face again. But this time, she confronts the bully and tells him to stop doing it, to which he apologizes, unaware of what he had done before. In the closing statement, the reader is told that if a bully tries to kick sand in their faces, just tell that person it makes you mad and that you don't like it.

The Hole Story or Gone Fishing

The final story has Grover and his friends Ernie, Bert, Herry Monster, Cookie Monster, Big Bird and Betty Lou fishing together. But when the boat starts springing leaks, Grover can't find a telephone booth to change into his Super Grover outfit (which he had packed in his fishing creel), and the others are oblivious to this incident, so he must try to stop the leaks by plugging them himself. But then he catches a big fish, which pulls him underwater. There, he finds a discarded telephone booth under the sea, become Super Grover, and saves the boat by carrying it in mid-air. 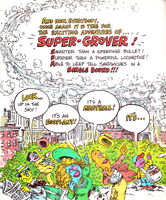 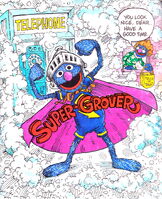 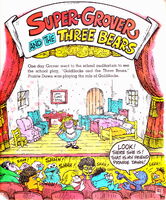 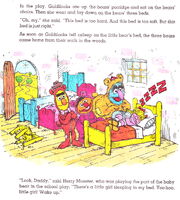 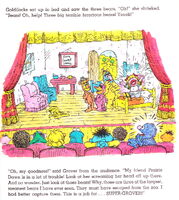 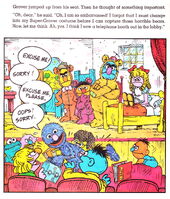 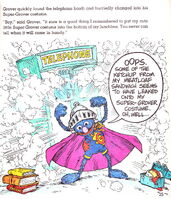 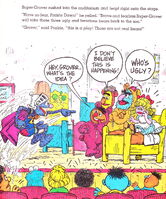 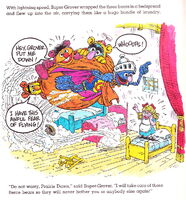 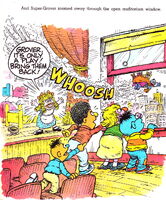 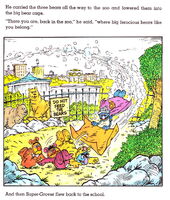 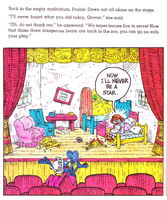 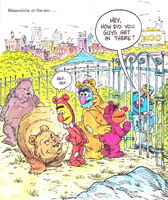