The Fall and Rise of Reginald Perrin is a BBC sitcom which ran for three series from 1976 to 1979, focusing on the title character's midlife crisis. Reggie Perrin, a disaffected sales exec, fakes his death to escape his routine life; further escapist efforts followed in later arcs. The series relied heavily on catch phrases, notably stuffy boss CJ saying "I didn't get where I am today by..." The show spawned a 1996 sequel, a short-lived 1983 American version, and a remake (Reggie Perrin). 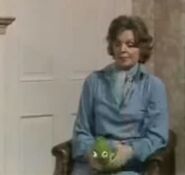 Elizabeth holding Kermit
Add a photo to this gallery

Wikipedia has an article related to:
The Fall and Rise of Reginald Perrin
Retrieved from "https://muppet.fandom.com/wiki/The_Fall_and_Rise_of_Reginald_Perrin?oldid=1129063"
Community content is available under CC-BY-SA unless otherwise noted.