The Farmer is a full-bodied Muppet who appears in The Tale of the Bunny Picnic. The surly Southern-accented farmer tries to protect his produce from the rabbits, and threatens his rather mistreated dog if he lets any get through.

Although ironically the Farmer is allergic to bunnies, he still intends to make a stew out of them. In his own words, "the only rabbit that doesn't make me sneeze is a stewed rabbit." Bean Bunny is later able to use the Farmer's weakness against him.

The towering Farmer's features are slightly obscured, both by his hat and by his shadow, although his handkerchief (to deal with the sneezes) is usually present. A far more detailed view of the Farmer occurs in the book adaptation of the special. 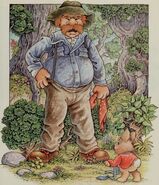 The Farmer, illustrated by Diane Dawson Hearn
Community content is available under CC-BY-SA unless otherwise noted.