The Frogtown Hollow Jubilee Jug Band was formed just days before Waterville's annual Christmas Eve talent show. The band mates were hoping to win the grand prize of "$50, Cash" (Emmet: "Fifty dollars! Split four ways, that's twelve dollars and fifty cents...Lotta money..."), but it was Emmet who had the most riding on winning the money. Not only had he destroyed his Ma's washtub (her only real source of income), by putting a hole in it to make his Washtub Bass, but he desperately wanted to give her a piano for Christmas. Because after Pa Otter passed away, Ma was forced to hock her piano, which to quote Ma Otter, "...was the saddest thing I ever had to do." Of course making Emmet all the more determined to win. The band rehearsed relentlessly for the competition. Spending hours practicing in their tree house, the band perfected their rendition of the classic song "Barbeque".

However, the band's planning and practice had to be tossed aside just minutes before going on stage when it was discovered that another entrant, Yancy Woodchuck, chose to perform "Bar-B-Que" as well. Only moments before the band was called on stage, they group had rushed to the alley behind the Waterville Town Hall to pick and practice a new song for the competition.

The band finally took to the Waterville stage to perform the song "Brothers", accompanied by the Talent Contest's "House" pianist. The band received an uproarious applause for their performance; and it seemed as though they had the Prize Money in their grasp, a last minute entry by "The Nightmare", a band comprised of the hoodlums from Riverbottom, who heckled Emmet and the guys when they were rehearsing in the tree house. They were also the ones who wrecked up the Fruit Stand and then the Music Store in Waterville (which happened to be the one that carried the guitar, with "the Mother Of Pearl inlay", that Emmet wants so badly, that it inspires his Ma to hock "Pa's old Tool Chest" to buy fabric for a new dress to wear in the talent show. Consequently, hocking Emmet's only means of income.). Sadly, the judges saw "that little somethin' extra" from The Nightmare, and Emmet and the guys (and Ma Otter, as well) lost the talent competition and, seemingly, their livelihoods along with the prize money.

Depressed and saddened by their loss, the band met up with Alice Otter, another losing talent show entrant, and the mother of the band's washtub bass player. The five musicians eased the agony of defeat by singing an a capella blending of their songs - "Brothers" and "Our World" as "Brothers in Our World" - as they walked the frozen river back to their homes in Frogtown Hollow. Their musical melding was overheard by local proprietor Doc Bullfrog. As the owner and manager of the Riverside Rest, a popular local cafe and night spot, Bullfrog quickly offered the Frogtown Hollow Jubilee Jug Band and Alice Otter a permanent gig performing at his establishment. The band agreed to play regular gigs at the Riverside Rest as soon as they were assured that they would be able to secure some mashed potatoes and be paid money to play. 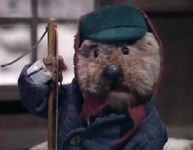 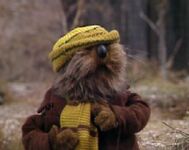 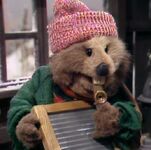 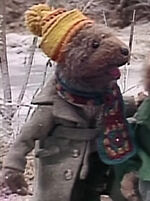